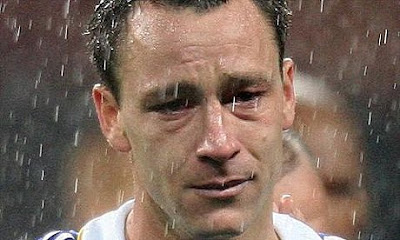 Below is a post by fellow Drum blogger Aaron Bimpson. It’s about how poor England were in the 2010 World Cup and why ‘brand’ might be at fault. I agree with much of it, but as my reply in the form of a two-minute comment turned into a whole new post, I realised how vital sport is not only to a nation, but to people’s lives in general.

There. Said all that without mentioning ‘passion’ once. D’oh.

As I walked through the city last Sunday afternoon amidst swathes of the stunned and disillusioned, I had watched ‘it’ at the gym from a treadmill. I actually think I clocked more mileage than Rooney, which really isn’t a testament to my level of fitness, more a sad reflection on his. While I surveyed a scene of national mourning and drunken heartbreak. The real underlying issue occurred to me – England have no brand anymore.

If a player from an emerging nation plays extremely well and shines out at the World Cup, maybe, just maybe, he’ll get procured by a second tier Premiership team or become a squad player at one of the big four. As a result his brand gains fame, notoriety and the opportunity to succeed. The trouble for England is that all of our players already do that. So there’s no real distinct advantage of playing for England. Wayne Rooney gets no real benefit from playing for England, he already plays for Manchester Utd, let’s be honest brand Ferguson is a bigger brand than brand Fabio. Robert Green didn’t save it because he didn’t really have to, his bottom line is not really affected by not playing for England.

England’s brand of Football has suffered. I’m not for a second talking about the style in which we play and I’m not just talking about who’s kissing and selling this week. I’m talking about the entire Brand identity of English football. Like many brands suffer, because they just got content and of course you know what happens to contented, slightly unfit, pompous, arrogant, comfort zone brands? Sooner or later, younger, technically astute, fitter, faster German brands come along and thrash them? We had brand under Venables, We had brand under Robson and while we didn’t win anything under either, at least we were proud and happy to be associated. Our Brand is lazy and tired we have a Lampard / Gerrard ‘buy one get one free scenario’ – truly a place where brands go to die.

Take the Germans, the Ghanaians, the teams from South Korea and Japan, even the younger members of the Argentina squad. Observe the wide eyed, X-Factor like enthusiasm with which they go about a game. They take risks, they have no fear of defeat, they work desperately hard. Whatever happens throughout the rest of the tournament, opportunity will be knocking for the young German players and their brand of invigorating, fun and flowing football. Then they’ll launch that brand into a wider market.

We have emerging markets in the Football sphere like we have emerging markets in the world economy. The Asian link here is by no means tenuous, South Korea developed a love of Football, they chose that they wanted to be good at it, now they are; they bend it like Beckham, they pass like Holland, and they dive like Brazil. Adding their own South Korean sense of cast iron discipline, and feverish intensity (Fabio should have taken a job there perhaps) and their almost devout humility and desire to serve the team – that’s one big impressive brand – Man Utd have bought into with Park Ji Sung.
A more ringing endorsement in Football, there is none.

For all the huffing and puffing and sackings, booings, unreserved apologies and goal line technology debates, brand is important, brand is a choice, we all have to ask ourselves what we would choose for ours, or we’ll go the way of the three Lions.

And the unfeasibly large and over-indulgent response: (At the time of going to pixels on Ouch, I was still awaiting untold abuse.)