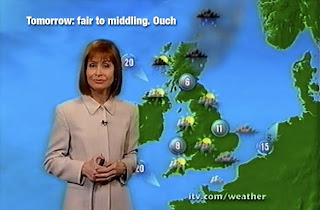 You’ll be aware that Gordon Brown’s just wheeled in Labour’s new slogan for the forthcoming election, ‘A future fair for all.’

Ok, it’s in stark contrast to what Margaret Thatcher’s campaign line could have been, ‘A future free for all.’

But do you really want ‘fair’?

‘Fair’ doesn’t cut it. I want a dose of super-double-bloody-brilliant, corking weather that cracks flags and gets kids on front pages stuffing cones in their eager mushes, thanks.

But then again, maybe I’m a selfish product of the Tory/New Labour capitalism, pedalled over the last thirty years. I want good times. I want prosperity. I want sunshine. And I’m prepared to work my arse off for it.

A direct follow on from the enterprising true blue days of the eighties, New Labour (and this tired old Labour), has continued to preside over outrageous consumerism, a credit system built on a platform of jenga and an attitude of pure greed – none more so than with our esteemed MPs themselves.

So excuse me if I scoff at ‘fair.’ Fair sounds like my bloody-well-hard-earned cash is going to be shared out amongst the Migginses – you know, the ones who could never be arsed at school, who expected the state to pay for their six-pack of kids who then wouldn’t take responsibility for the little bleeders trashing the neighbourhood.

The trouble with ‘fair’ is, it just isn’t fair.

No, I’m selfish. I want bright. I want opportunity.

‘Fair’ should be consigned to the dark corners of the Great British bad weather.

Yep, thanks Gordon, but you can stick ‘fair’ where the sun don’t shine.
Jump to the Ouch view on the Tories’ campaign line >>
Larner Caleb