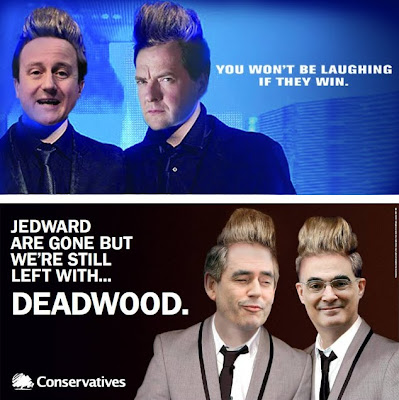 There’s also no denying that the UK’s MPs have systematically raped, pillaged and disrespected the country, its bank balance and its populace.

So you’d think that both parties would have a little humility; a little more on their agenda than childish backbiting and cheap shots with no regard whatsoever for the fact that we might want some serious work out of these guys for at least the next century.

Their recent marketing campaigns would wholeheartedly suggest not.

The half-arsed copy line, ‘You won’t be laughing if they win’ only added injury to the insult.

And I mean insult. I didn’t want to use this blog to rant – it’s the number one schoolboy error of blogging – but I’m pretty XXXXing dismayed.

Dismayed that intelligent people are getting fed this kind of puerile, benefit-bereft drivel; dismayed the party has not had a thought for how they can address the most pressing political concern of the moment and dismayed that anybody in advertising or marketing can even think this worthy of public viewing.

It gets no better I’m afraid. Since the Irish twins have been booted off the X Factor, the Conservatives have wasted no time in launching their own assault. Sorry insult. At least this version, featuring the hapless Brown and Mr. Darling is a slightly, ever so slightly better Photoshop job but both ads belong on the b3ta challenge – a pretty funny site where anyone who knows how to paste an image into a word doc and come up with a line can broadcast their message.

No points whatsoever to the reds or the blues for:

Full points to both agencies concerned however, for:

extracting even more taxpayer’s dosh on something that, quite frankly wouldn’t get in the portfolio of a six year old.