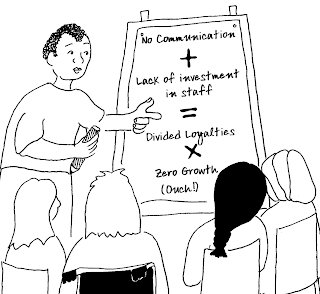 As someone who’s cracked out more direct mail than you can wave a DL envelope at, the irony of an organisation in the communications industry on strike is not lost on me (unlike most of my love letters from Bouncy Knowles right now). The Royal Mail not only seems to refuse to embrace the future, it balks at the mere thought of even to talking to it. Mulling over this incongruity reminded me of an agency I did a spell with a while back in the capacity of CD. As I was there for a fair old time my commitment to the company cause was stronger than that of a quick project crafting a letter for a direct client and I began to take issue with the Board on one particularly thorny point. Yup, you guessed it, my pet subject of the moment; communication.

Now, if you’re the MD of an agency that I’ve worked with and thinking, ‘Hey, that’s me you infidel…’ don’t get all paranoid – unless you’re reading this from a distant place where the average temperature is slightly higher than nipple-erecting and Yorkshirish is definitely not the native tongue. And if you’re just wondering who the hell this agency is, you know confidentiality is my only currency.

So what did I notice in my short, but long-enough time there? Well firstly, I was aware that the company had a fairly high and frequent turnover of staff. I then soon became aware that the people who were there for the duration weren’t there out of commitment to the cause but just glad to be in work. Who wouldn’t be in these Spartan times? Then, like a lot of things that come in threes, I noticed the humdinger; this organisation did not hold any company meetings. Not one. Nada. Zilcho. My God, they didn’t even hold production meetings but don’t get me started on that.

Naturally, as a concerned and (albeit temporarily) committed member of the team, I queried with the Board the reasons behind the lack of information-sharing with the rest of the staff. And, like a Jack Russell with a serious bone of contention and a heavy dose of small-dog syndrome, I did this more times than I care to remember in the short time I was plying my trade there. Here are some of the responses I got:

“We’re not here to have a get-together, we’re here to service our clients.”

“What do they need to know? They get their briefs. They do the work.”

“They’re not the people who make the decisions.”

“Why take up valuable time chatting when we should improving the standard of our work?”

So why did all this matter to me? Why do those of you that do know me now see why I’ve got one or two more grey hairs than I had just a little while back?

Because, you know where this is going. Or more to the point, you have a fair idea where this company is going. That’s right, absolutely nowhere.

Because if you don’t involve your staff, it will feel uninvolved. People will believe they’re on the fringe because that’s right where you’re sticking them. And as such, they’ll naturally break away from the core group. If you don’t tell your people where the agency is going how can you ever expect them to drive in the right direction? If you don’t explain where the company could do better, how do you propose to improve in those areas? Or expect others who are doing well to step in and help? If you omit to reward success why should people strive for its dizzy heights again? If you don’t nurture the idea of individuals talking about the different work they’re producing in the name of the company how can you expect the cross-pollination of great ideas over different sectors and media to flourish? If you don’t take your people with you, how can you expect to create a brand that will be great, that will have serious equity and that you can sell to future clients and owners alike? The answer is you can’t.

Just like many of the clients this industry works with, you can’t ever hope to build an attractive, fully-rounded brand that future stakeholders and management teams will be crawling over themselves to inherit without your biggest brand asset – your people. It’s your people who have to live and breathe your brand values; your people that deliver your brand to the outside world. Yes, you may produce decent work from time to time but eventually that will suffer the symptoms of a conveyor belt of personnel delivering it. And yes, you may have an enviable client list but hey, that’s made up of people too – people who’ll soon cotton on to ever-changing account handlers and an inconsistent creative product.

So, if your exit strategy is to go on to bigger and better things or even if you’re hoping to spend the rest of your days on a lilo in Lloret nursing a pina colada, the only way to leave your agency in great shape for a sale and subsequent success is to lead your people to victory through the power of communication.

Ouch tip #999: If you’re raring to go for your next company get-together, remember you haven’t employed a bunch of accountants – avoid doing the financials in Swahili.