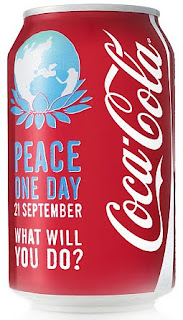 I was getting in touch with my gay side whilst working on some fashion-based concepts for a lovely bunch of people north of the city. Subliminally, I must have also been getting in touch with my youthful side as I sat in front of my mac with a full fat coke on my desk and screaming dayglo orange trainers on my feet. Yup, at my age I should know better.
I took a double take at the limited edition can and noticed that it was promoting Peace One Day (POD). If you think about it, the ‘genius’ of the back-to-basics design created by Attik allows plenty of scope for a plethora of ongoing promotions. Founded by film maker Jeremy Gilley in 1999, POD drives peace initiatives around the world, many of which have included world leaders such as Kofi Annan, the Dalai Lama and Shimon Peres.
Maybe it was a slug of coke that triggered the synapses but I then performed another double take; this time at my luminescent shoes and the three crinkle-cut stripes that adorned each side. It was then the old grey matter really got into gear and remembered an event that should have received far more publicity than it actually did.
Adidas, giant of the sportswear world was playing a football match against Puma, giant of the sportswear world. Great idea you say, but why all the fuss? Well, it’s not until you delve a little deeper into the history of these two monumental brands that you realise there’s a little more to it than a simple kickabout on the park with jumpers for goalposts.
In the town of Herzogenaurach, northern Bavaria where the two companies were founded, the match is being hailed as the end of the Battle of the Boot. 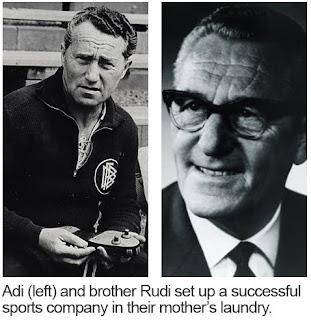 Thing is, back in the 1920s, that small Bavarian town was home to the Dasslers – a happy family, consisting of Adolf (Adi) and Rudolf (Rudi) Dassler – two sons of a master cobbler. Pretty soon, the two brothers started to display their own talent for turning leather into highly effective sports shoes.
Adi, in particular, designed spiked running shoes and was responsible for helping Jesse Owens win four gold medals in the 1936 Olympics in Berlin.
By now, a successful sports shoe company was firmly established in Herzogenaurach. The good news story didn’t last however when a feud broke out between the two siblings. Anecdotes suggest that things kicked off (sorry) when Adi and his family were sheltering from an Allied air raid. “There come those Schweinehunde,” he shouted when his brother’s family entered the shelter. He tried to explain later that the “pig dogs” insult referred to the RAF bombers rather than his relations, but with a comment like that in public, the damage had been done.
Later Rudi, a fully paid-up member of the Gestapo, became a US prisoner of war, whilst Adi, more than happy to do business with Jewish firms, was in full control of the factory and unwilling to make much space for Rudi on his return. The two went their separate ways with Rudi opening a new factory on the other side of the Aurach river to his brother’s Adidas factory. First it was called Ruda but this was replaced by the sportier sounding moniker, Puma. Both Adidas and Puma are now major employers in the cobblestoned town of 23,200 residents.

As the feud intensified between the sporting giants over the years, both companies invested fortunes, attempting to outbid each other for superstar endorsements; David Beckham, Muhammad Ali and Madonna all wore Adidas; Pele, Boris Becker and Usain Bolt were signed by Puma.
Tales are rife from the 1960s and 70s of sabotage, underhand scheming and of Olympic athletes being handed secret payments to wear one of the rival brands.
But just last week in a momentous reconciliation the two companies met on the football pitch in support of Peace One Day.

The result? A blinding spot of positive PR for both brands. Or, should people be more inspired by this story than Puma bargain for and unearth the company’s links to the Third Reich, potentially a lot of negative publicity. As for the overall competition: may the best team win.