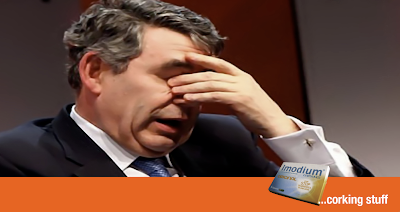 The following article is the unedited version of a feature that first appeared in the Yorkshire Post, dated 16th March 2010.

Don’t think so? Already clicking off in a disagreeable rage?

That’ll be Brand Brown at work. Or not, depending on your perception of our current PM.

There’s a school of thought that says an individual cannot be a brand; that brands are only whipped off corner shop shelves or worshipped in those churches of consumption, the retail parks cloned so inevitably up and down our country. But, having worked in marketing for longer than I care to remember, not to mention trying to persuade much of the nation to splash its cash on anything from iPhones to eye tests, from to feminine hygiene to even fancier new pads, I’m in the camp that firmly believes a person can be a brand.

Anything that needs to sell as a product, as a service, as an idea, automatically comes as a brand. That’s because the potential customer has to have a perception, a feeling, a sense of a set of values they are buying into, in order to make a choice. That perception is the brand. And God knows, in the run-up to a general election, the whole country has a choice to make and Gordon could do with some seriously good marketing right now.

A deeper shade of Brown

In reading, and scoffing at the first three words of this article, you’d possibly agree. But the fact is you’re not invited to Edinburgh University at sixteen, where you gain a First Class Honours MA followed by a PhD, all whilst becoming the establishment’s youngest ever Rector in history, without being brilliant. You don’t become a Member of Parliament without being able to deftly communicate your point of view. And you certainly don’t have your early speeches labelled by peers and respected political journalists alike as ‘electrifying’ if they’re anything short of high voltage.

But that’s probably not how you think of Gordon Brown is it.

And that’s where Brand Brown has failed Gordon Brown.

As my Old Man used to say about John Major, “What the hell are his PR team playing at?”

But, as anyone who knows their marketing onions will tell you, it takes more than just PR to make a winning brand; it takes the full marketing mix. Yep, ‘fraid so, but our ex-Chancellor of over a decade has to be on the money on everything from advertising to direct marketing, from social media to PR.

The big question asked a lot right now is can Gordon turn around a devastating start as PM to win the forthcoming election?

That’s debatable until the final ballot paper is checked off, not least because of a turn-out that was so disinterested at the last election, Big Brother was blessed with more votes. These people can be brought out of their shells by a change in perception; by a tweak of Brand Brown. And the Tory voters? Well, wasting any kind of marketing budget on that audience in the short-term isn’t advisable and it’s too late in the day for a rebrand of Brown to have any effect anyway. No. The ones who were shy last time round, the as yet, undecided and Labour voters threatening abstinence are the ones to unleash new Brand Brown on.

Starting with advertising. Getting caught up in childish tit-for-tat advertising that does nothing more than parody so-called popular culture is a complete no-no. The recent billboards showing Cameron and Osbourne sporting ice-cream Jedward haircuts and the equally, limp-wristed line, ‘You won’t be laughing if they win’ is nothing short of derisory especially when Brown has the opportunity to wipe the floor with an opposition party leader who acts like a salesman without any products to shift. So the first thing is, don’t even advertise. Book the space by all means but then use it to tell the nation what your policies are and you’ll have pulled yourself out of the same desperate name-calling playground the Tories inhabit immediately.

What about direct marketing? A more targeted approach that grabs people on their doorsteps. Well, that’s just it – Gordon isn’t communicating. He’s too busy defending the damaging attacks about damaging attacks. When more of the waverers are warming to the idea that Brown may not be a soggy biscuit after all, he needs to capitalise on that forthright perception, get out there and talk to people. More importantly, he needs to get his team out there – on Britain’s doorsteps rallying the undecided, persuading the passive.

Which segues in to social media. Whilst social media will not be the be all and end all that many marketers would have us believe, it will be an essential communication tool for reshaping any brand. But it’s a tool that should be handled with the utmost care as any big brand such as Vodafone, Paperchase or Toyota will tell you. You’re watched 24 hours a day, 7 days a week online and anything that can be picked up will be lofted high into the baying crowd and the soggy end used to beat you where it hurts until the baying crowd becomes an exponentially larger anti-you mass. So Brown needs to practise his YouTube camera presence. And then practise again. Learning to smile is good. Smiling in the wrong places is devastating. So he needs to practise unnaturally obsessively until his straight-to-camera ease appears totally natural.

And talking of appearances, this one is for Brown’s PR boys and girls. Gordon really needs to think about the company he keeps. Whilst he momentarily climbed up the greasy polls with a more human appearance on Piers Morgan the other night, he immediately dumped himself amongst a shallowbrity set of peers including Katie Price or Jordan or whoever she is these days, Vinnie Jones and Dannii Minogue.

Perhaps a shame to say it, but it does bring down his brand perception and to half-quote my Old Man, ‘His PR team could have played it better’ – with perhaps an appearance with Paxman or even a special chat with Hard Talk’s Stephen Sackur. Gordon could have communicated his more human side in more credible surroundings – in other words, he needs to choose his battles wisely.

And if there’s just one thing Gordon should remember if nothing else – it’s be yourself in a crowded market. He may not like it but his competition is not just Cameron, it’s his predecessors, most crucially, Tony Blair. And whilst Blair is undoubtedly a bloke who would join the navy so the world could see him, that’s not Brown’s style.

To imitate would be disastrous.

To find, then hammer home the main points of difference could be the key to becoming our next, elected PM.